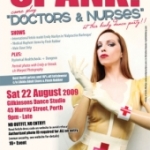 RedHotPie review: The Cause or the Symptom?!

It’s official – this was the sexiest, best dressed, and flat out coolest Spank party yet. With a white-hot headlining show from Hollywood bondage model Emily Marilyn, this party attracted fetish fans from as far away as Tasmania and Sydney. And with naughty Nurses, deviant Doctors and perverted patients as far as the eye could see, it was a challenge to pick out just a few lucky winners for the official prize-giving later in the night – but the judges were up to the task…

There was also plenty for those partygoers more interested in showing off their outfits on the dance floor, where throbbing house and dance tunes kept people flirting and shaking their rubber-clad behinds till the wee hours. A celebration of all ‘alternative’ clubbers, we saw everything from cute Goth girls, skin-art fans, latex mask-wearing submissives, skimpy cuties and drag boys to twisted burlesque – a veritable kaleidoscope of kink! Rumour has it that Spank is going to host a party in Melbourne next year… we’re now on the edge of our seat waiting for details. Go Spank!